Marquis de Sade was born in 1740, a French philosopher and writer of explicit sexual works. He became notorious for acts of sexual cruelty in his writings as well as in his own life. His first serious offence came when he forced a prostitute to incorporate crosses into their sexual acts, something that seemed altogether blasphemous. The woman immediately told the police about the event, and de Sade was arrested and imprisoned.

The Marquis de Sade viewed Gothic fiction as a genre that relied heavily on magic and phantasmagoria. In his literary criticism Sade sought to prevent his fiction from being labeled “Gothic” by emphasizing Gothic’s supernatural aspects as the fundamental difference from themes in his own work. But while he sought this separation he believed the Gothic played a necessary role in society and discussed its roots and its uses. He wrote that the Gothic novel was a perfectly natural, predictable consequence of the revolutionary sentiments in Europe. He theorized that the adversity of the period had rightfully caused Gothic writers to “look to hell for help in composing their alluring novels.” Sade held the work of writers Matthew Lewis and Ann Radcliffe high above other Gothic authors, praising the brilliant i

imagination of Radcliffe and pointing to Lewis’ The Monk as without question the genre’s best achievement. Sade nevertheless believed that the genre was at odds with itself, arguing that the supernatural elements within Gothic fiction created an inescapable dilemma for both its author and its readers. He argued that an author in this genre was forced to choose between elaborate explanations of the supernatural or no explanation at all and that in either case the reader was unavoidably rendered incredulous. Despite his celebration of The Monk, Sade believed that there was not a single Gothic novel that had been able to overcome these problems, and that a Gothic novel that did would be universally regarded for its excellence in fiction.

Many assume that Sade’s criticism of the Gothic novel is a reflection of his frustration with sweeping interpretations of works like Justine. Within his objections to the lack of verisimilitude in the Gothic may have been an attempt to present his own work as the better representation of the whole nature of man. Since Sade professed that the ultimate goal of an author should be to deliver an accurate portrayal of man, it is believed that Sade’s attempts to separate himself from the Gothic novel highlights this conviction. For Sade, his work was best suited for the accomplishment of this goal in part because he was not chained down by the supernatural silliness that dominated late 18th-century fiction. Moreover, it is believed that Sade praised The Monk (which displays Ambrosio’s sacrifice of his humanity to his unrelenting sexual appetite) as the best Gothic novel chiefly because its themes were the closest to those within his own work.[59]

Sade’s fiction has been classified under different genres, including pornography, Gothic, and baroque. Sade’s most famous books are often classified not as Gothic but as libertine novels, and include the novels Justine, or the Misfortunes of Virtue; Juliette; The 120 Days of Sodom; and Philosophy in the Bedroom. These works challenge traditional perceptions of sexuality, religion, law, age, and gender. His opinions on sexual violence, sadism, and pedophilia stunned even those contemporaries of Sade who were quite familiar with the dark themes of the Gothic novel during its popularity in the late 18th century. Suffering is the primary rule, as in these novels one must often decide between sympathizing with the torturer or the victim. While these works focus on the dark side of human nature, the magic and phantasmagoria that dominates the Gothic is noticeably absent and is the primary reason these works are not considered to fit the genre. 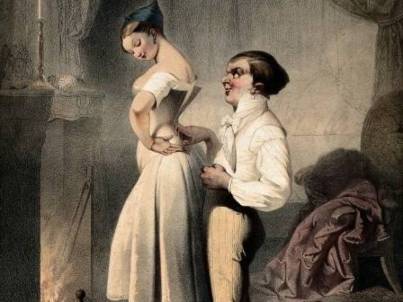 Through the unreleased passions of his libertines, Sade wished to shake the world at its core. With 120 Days, for example, Sade wished to present “the most impure tale that has ever been written since the world exists.” Despite his literary attempts at evil, his characters and stories often fell into repetition of sexual acts and philosophical justifications. Simone de Beauvoir and Georges Bataille have argued that the repetitive form of his libertine novels, though hindering the artfulness of his prose, ultimately strengthened his individualist arguments. The repetitive and obsessive nature of the account of Justine’s abuse and frustration in her strivings to be a good Christian living a virtuous and pure life may on a superficial reading seem tediously excessive. Paradoxically, however, Sade checks the reader’s instinct to treat them as laughable cheap pornography and obscenity by knowingly and artfully interweaving the tale of her trials with extended reflections on individual and social morality.

In The Crimes of Love, subtitled “Heroic and Tragic Tales”, Sade combines romance and horror, employing several Gothic tropes for dramatic purposes. There is blood, banditti, corpses, and of course insatiable lust. Compared to works like Justine, here Sade is relatively tame, as overt eroticism and torture is subtracted for a more psychological approach. It is the impact of sadism instead of acts of sadism itself that emerge in this work, unlike the aggressive and rapacious approach in his libertine works. The modern volume entitled Gothic Tales collects a variety of other short works of fiction intended to be included in Sade’s Contes et Fabliaux d’un Troubadour Provencal du XVIII Siecle.

To enlighten mankind and improve its morals is the only lesson which we offer in this story. In reading it, may the world discover how great is the peril which follows the footsteps of those who will stop at nothing to satisfy their desires.

Descriptions in Justine seem to anticipate Radcliffe’s scenery in The Mysteries of Udolpho and the vaults in The Italian, but, unlike these stories, there is no escape for Sade’s virtuous heroine, Justine. Unlike the milder Gothic fiction of Radcliffe, Sade’s protagonist is brutalized throughout and dies tragically. To have a character like Justine, who is stripped without ceremony and bound to a wheel for fondling and thrashing, would be unthinkable in the domestic Gothic fiction written for the bourgeoisie. Sade even contrives a kind of affection between Justine and her tormentors, suggesting shades of masochism in his heroine.

We aim to have quality conversations about “L”iterature within the genres of Horror, Sci-Fi and Fantasy. We feel that mainstream tends to neglect these genres as having real value in our communities. Reading and analyzing how we study fear and how writers use fear is important to find the monsters, the enemy, the feeling of isolation within our communities. View more posts